It would probably be a good idea to dedicate a series of posts to kinetic chain development, but I just need to get this thought out there.  Especially in light of Vibram settling a law suit suggesting strength of muscles reduces injury.

When I was a silly body-building weight lifter, tracking diameter of biceps (seems so silly).  I would target muscles and do isolating exercises to make them stronger (again, very silly).  Some muscle groups responded well, others not so  much.  I struggled to know why.

For example, thin wire'y calves.  Lifting tons of weight on a calf-raising machine made no difference in large calf muscle size.  Besides the obvious 'who cares', I thought I narrowed the reason why.  The calf is a link in a chain.  You can't make certain links of a chain stronger than others, it makes no sense.  My Achilles tendon (through genetics? or whatever the reason) was as small as a #2 wooden pencil.  People with large calves had thick thumb-width Achilles. 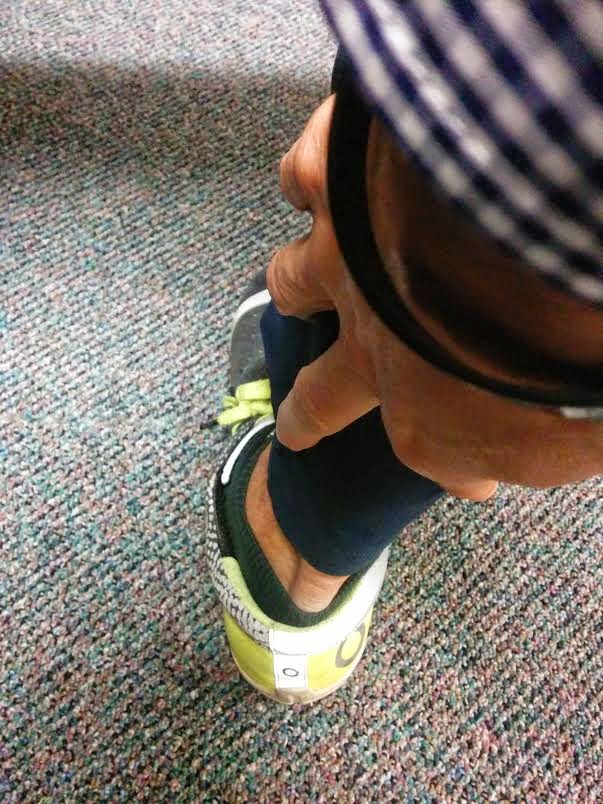 After a few years of running, using thin (or no shoes) my calves are getting functionally stronger BECAUSE the entire chain is strengthening.  As you'd expect, my Achilles tendon is two times thicker.  Tendons, ligaments, bones, muscles: they all react and adapt.

Adaptation is a reMARKable thing.

A good source that describes bone mineral density, tendon and muscle adaptation, check out  the book 'Brain Training For Runners'.
Posted by Unknown at 11:46 AM No comments:

The real story behind cramping

The bottom line is - so electrolytes, their presence in the blood is what's important NOT their presence in your sweat or urine.  A salty sweater is a person trying to get rid of salts that are in surplus.  Sadly that person's advised to take in MORE salts.


and pooping is a sign you need to eat more poop

The following is the work of Martin Schwellmus, the master on the subject.  Drinking sports drinks is a silly plan.

dehydration, electrolytes, exercise physiology, fluid intake, heat, muscle cramps, sports medicine
As promised in yesterday’s post, today we kick off our latest series – Muscle Cramps. We hope that none of you did cramp in the middle of the night, as we mentioned yesterday! Though if you did, we’re sure you stretched your calf and avoided the temptation to point your toe!
This is a follow-on from our series on Fluid Intake and Dehydration, and as we were preparing to write this series, we realised that there may actually be even more nonsense and blatant lies in the media than there were for dehydration!

In the dehydration series, we dealt with the very obvious conflict of interests that arise when a company which manufactures and sells sports drinks become the company who are funding and then performing much of the research on fluid and exercise. This is what happened when Gatorade created the Gatorade Sports Science Institute, and began funding research studies all over the USA, that rather unsurprisingly told the world that thirst was not enough, and you just had to drink as much as you could.
Can you imagine Gatorade issuing the results from those first studies saying to people “Folks, we’ve tested the sports drinks, and we don’t have much evidence that you really NEED them. You’d most likely be fine without them, but hand over your money and buy your Gatorade at the counter anyway”. An unlikely scenario. Of course, it was never as simple as that, and as we tried to explain previously, some of the early lab-based science was actually sound, but its application became the problem. More than this, the manner in which the research was compromised, becoming a form of shameless endorsement for the sake of sales in subsequent years was the ultimate problem. But that was all covered in our previous series, for those who are interested…
Top

Muscle cramps– EVEN MORE PERVASIVE MIS-MARKETING, BUT A COMPLEX ISSUE

The same marketing vs scientific integrity debate exists for muscle cramps. The industry that has sprung up around the muscle cramp issue has spread far and wide. It includes Gatorade, who advocate the use of their drinks to replace the loss of salt which is, according to their research, responsible for the cramp in the first place! But more than this, there are dozens of products that claim to prevent cramp – next time you are in a pharmacy, take a look at the range – everything from gels, to creams, to pills, to effervescent tablets.

All these products work off the same premise – they put back the electrolytes that exercise will take out. And it’s the loss of those serum electrolytes, the theory goes, that are responsible for the cramps during exercise. This theory, over 100 years old, is one broad category of theories for muscle cramps.
The second theory is that muscle cramps are caused by a ‘malfunction’ in the control of the muscle by the nerves – an abnormality of neuromuscular control which is caused by fatigue.
Our objective in this series is to look at these two theories, beginning with a bit of groundwork and history…

Perhaps one of the first things to do is provide a definition for cramp, as well the usual disclaimer that we cannot possibly cover all the possibilities and scenarios in this series. Firstly, cramp has been defined as a “spasmodic, painful, involuntary contraction of the skeletal muscle that occurs during or immediately after exercise”.
Note that this definition applies to exercise-related cramps only, and therefore, it excludes a whole host of other possible cramps. We must point out that if you do suffer from very regular cramping, there are some conditions that can cause this – endocrinologic, neurologic, and vascular disorders, treatment with certain drugs, and occupational factors. Then of course, some cramps are what the experts call “idiopathic”, which means they have no cause (but actually means we don’t know what causes them, but it sounds better to say “idiopathic”!). If you are a regular cramper, it’s probably worth seeing a doctor and just having an exam to determine whether any of these broad factors might be responsible.
But returning to muscle cramps, the lifetime prevalence of cramping is reported to be as high as 50%, which is remarkably high. Some people are also quite clearly more susceptible, and you can actually predict with a fair degree of accuracy who will cramp during a marathon based on their history and their racing strategies (more on this later).

The history of cramping– THE ELECTROLYTE DEPLETION THEORY

The earliest reports of muscle cramps come from 100 years ago, when labourers in hot and humid conditions of the mines and shipyards suffered from cramps. Even that far back, the sweat could be analysed, and it was noticed that the builders had a high chloride level in their sweat (chloride, incidentally, is one half of the salt in your sweat). The conclusion that was made was that the labourers were sweating out valuable electrolytes, causing their muscles (and nerves) to malfunction. The heat and humidity were key factors that caused this situation. It must be pointed out that no one prospectively measured the sweat of the labourers who DID NOT CRAMP, something that we’ll look at in our next post.
Later, the builders of the Hoover Dam famously recovered from cramp when they were made to drink salty milk, entrenching the theory that salt loss was the cause of cramp.
And perhaps rather surprisingly, that was it – based on those anecdotal observations, the theory which you probably hold true today, was born. That is, cramp is caused by a loss of sodium, chloride, and later calcium and magnesium were added to the mix. Heat and high humidity were implicated as “accessories”, and the term “Heat-Cramps” was even conceived. According to this theory (as seen by this article and the “expert” testimony) , cramps happen because athletes exercise in the heat, lose electrolytes in their sweat, and the depletion combined with high body temperatures cause muscle cramp.
For example, take these testimonies:

“When a young athlete experiences heat cramps, pull him or her off the field into a cool area and gently stretch the affected muscle. “Have them drink, drink, drink, and then drink more,” says Albert C. Hergenroeder, professor of pediatrics at Baylor College of Medicine and chief of the sports medicine clinic at Texas Children’s Hospital.

“High-sodium drinks will prevent children from getting heat cramps,” says Jackie Berning, PhD, with the National Alliance for Youth Sports. “Gatorade has just enough sodium to prevent those cramps. But if you’re a heavy sweater, and you’re still getting cramps after drinking Gatorade, eat some salted pretzels or salted nuts. Those work fine.””

There is of course more to it than this, but the essence is that the serum electrolyte depletion theory was created without any controlled, clinical studies to establish whether the depletion of salt through excessive sweating was to blame. Rather, the theory was picked up on and used to spawn the numerous products you can purchase today. But, as I’m sure you’ve guessed, there are some holes in it.

The problems with the serum electrolyte depletion theory

First of all, there is a key conceptual problem here, and that is that when you sweat, you don’t actually reduce electrolyte concentration. That is, there are certainly electrolytes in the sweat, but the concentration of these electrolytes is so low, that sweating is likely to make you HYPERTONIC, not hypotonic. We looked at this in our posts on fluid – when you sweat, you lose more water than electrolytes, because the sweat is HYPOTONIC. Therefore, sweating cannot lead to a fall in electrolyte concentration.
What transpired was that Gatorade (and the rest of the ‘industry’, it must be said) developed the theory of “salty sweaters”, which is the term they gave to people who they said have abnormally high salt levels in their sweat. Small problem – no one actually knows what a salty sweater is. How much salt does there need to be in the sweat before you are placed in this group? No one knows. Recently, Professor Martin Schwellnus, widely published in this area, posed this question to scientists at the Gatorade Sports Science Institute at a conference on cramping – he received no answer.
The truth is, even the saltiest sweaters around still have hypotonic sweat, and so the more they sweat, the more they will cause their electrolyte levels to rise, not to decrease. This is a very obvious problem that is overlooked by the electrolyte replacement advocates.
Of course, those of you who read our fluid series might be thinking that if you then drink a lot of sports drink, you can reduce the electrolyte content, but that’s yet another reason why drinking too much is not a good idea…

The cramping paradox– WHY SPECIFIC MUSCLES?

The second problem is something we asked you in yesterday’s post. We asked whether the depletion of serum electrolytes would be expected to cause cramps in specific muscles, or all over? Hopefully it is evident that if a cramp was caused by a loss of serum electrolytes, there is no reason for the cramp to be limited to one muscle only. Rather, you would cramp everywhere. In fact, in people who have lost a great deal of salt and have become hyponatremic (not during exercise, but clinically), we know that they cramp in ALL their muscles.
But somewhat surprisingly, exercise-associated muscle cramps ONLY happen in the muscles that have been used extensively for exercise. The afore-mentioned Prof Schwellnus found in 2004 that the quadriceps, hamstrings and calves made up 95% of cramps in the 56km Two Oceans race in Cape Town.
Top

In the interest of time, we’ll call it on this post for today, and say that in our next post, we’ll tackle the electrolyte theory in more detail and look at some of the studies that have looked at people who cramp and those who don’t and compare their values.
Further reading: [1] and [2]