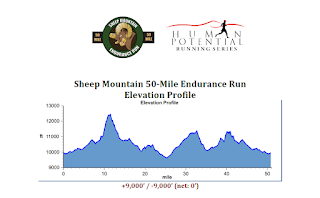 Last weekend I lost my mind and 'ran' the first year of the Sheep Mountain Endurance Run.  Advertised distance was 52 miles, elevation gain 9,000', lowest elevation 10,000, and highest 12,500'.  That climb and that altitude makes this the toughest run of my life!

But I, like a few others added some bonus distance due to so many turns on to small relatively unused trails.  I have the worst sense of direction when I get in my head, so tacking on ~1.5miles is pretty normal for me.  The race markings were good, I just needed to look up every once in a while to see them!  There were a dozen times when I'd panic because I hadn't seen an orange marker.   Also a dozen times when I laughed because I was running towards an orange flower!  One intersection was ambiguously marked. I was fortunate to see a few other runners scratching their heads as well.  Together we figured it out. 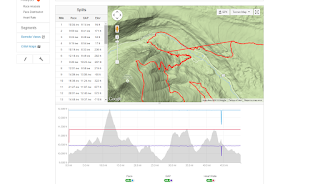 By the way, F.U. Strava, Garmin, all others ugh, Fuk!  I decided NOT to wear my Garmin Fenix 2 because it locked up / froze again last week while running in Boston.  I have a large external battery for my iPhone and used the Strava app.  Around mile 44 I didn't hear another 'mile update' for a while.  I opened the app and it had crashed.  When it woke up again it had remembered my last position and just said 'starting run' like nothing had gone wrong.  Turns out it missed ~70 minutes of my run.  So the recorded results read 49.9miles ran, I believe it's closer to 55!  Maybe the app was fine, I just took a hang glider from point A to point B.  Hang gliders seem heavy until you finally deploy it and shave off precious miles from your race :-/.

Equipment:
My Performance: This was a race of attrition, 11 out of 56 starters DNF'ed (a handful of DNS'ers as well!).  Altitude was getting to everybody. I can not explain why my altitude symptoms were pretty manageable.  I was mad I could't run simple non-technical 3-10% grades.  Breathing hard just to power-walk!  I kept reminding myself, oh yeah this is at 12,000'.  This relieved some frustration.  With a history of starting too fast and overestimating my abilities, it was a confidence booster to see someone ahead of me and slowly reel them in.  Although I have gotten stronger in the past couple of months, I know passing people was more them being at a low then me being at a high.  But still, ninth overall and seeing many GOOD runners come in after me was a pleasant surprise.  Maybe it's a sign of improvement on these tough Colorado trails.  My next race, the Pikes Peak Marathon performance will be a good indicator of improvement. 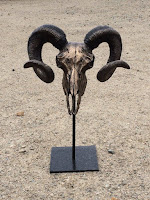 Finish: (although my name is Swedish....) At the finish, we were given the glorious opportunity to kiss the Sheep.  I call him Karl, he just kind of looks like a Karl.  I plopped down in perfect burpee form and kissed his little skull.  Then after asking permission, a quick little dry hump for good measure.  Next few runners picked up Karl and kissed him, I thought: 'oh smarter'!