<see article below> I don't know where to begin..  This guy is horribly confused and since he is reaching an audience- there will be damage done.   He says: "There is no best way to run. Period. Studies have been done on the footstrike of hundreds of elite runners and what we know is that half of them run heel-to-toe, and half have a midfoot strike. They run the way it works for them. You do too"

I counter - there is no way to know how you run with the overly supportive footwear that we're fitted for by someone who sells you shoes to treat your symptoms.

All elite athletes running differently from each other, ok - but the greatest ALL have 'growing up shoe-less' in common.  They found their 'way' to run by running without the support we're stuffed in to at a young age.   The reason there's no 2nd generation elite long distance runners so far is because the athlete is risen from poverty and their kids don't have to walk to school, that can afford expensive shoes, they don't walk to get well water, etc...


Are muscles and tendons are aligned to sequence in a certain way.  I dare-say you don't KNOW the way unless you're in touch with the ground and aren't running on muscles that have been atrophying since you moved out of your toddler shoes. Am I crazy?

The barefoot running joke: when will Chris MacDougall quit selling his snake oil?

10:03 AM on Thu., Nov. 10, 2011 | Permalink
Along with about a zillion other runners I read Chris MacDougall's book "Born to Run" when it first came out, and then I went to the Cooper Aerobic Center to hear him speak. I was amazed after reading the book and listening to his talk that anyone could be guilty of such faulty logic.
To hear him tell it, the Tarahumara Indians are the greatest runners in the world because they live in these remote and steep Copper Canyons of Mexico, they have no cars and no money, and run everywhere up and down these huge hills, from the first day they can walk.
So as a long-time runner, I thought to myself, "Hey, that would make me a good runner too, running up and down hills all day, never riding in a car, running to school, running back home, no money, no video games, just running with my friends. Yeah, I can see that."
But in an amazing leap of non-logic, MacDougall concludes that the entire reason the Indians are superior runners is that they run barefoot. And from there he tries to convince us that running barefoot is the only way to run long, fast and injury-free. He then moves on to the injuries and damage that runners undergo because they run in today's running shoes, with their motion control, stability, thick soles, heel protection and cushioning.
Now let's examine this sanely by first eliminating both ends of the running performance curve, the super weak and the super strong.
In 1954 Morton Thompson produced the great novel "Not as a Stranger" about Dr. Lucas Marsh, who struggles to do the best he can for his patients. He asks his older partner why it is the same people come to the clinic with ailment after ailment. Dr. Runkleman explains, "Some people are just constitutional inadequates." I never forgot this line, and I use it often to explain injuries. Every doctor knows it too. No matter how they run or what they put on their feet, some people are injured all the time.
At the other end of the spectrum are those super athletes and strong runners who could put bedroom slippers on their feet and run backwards for 50 miles, never stretch and never do core work. They never get hurt. I hate them, and so do you.
In the middle are the rest of us, and if you don't know this yet, get ready for some startling information. There is no best way to run. Period. Studies have been done on the footstrike of hundreds of elite runners and what we know is that half of them run heel-to-toe, and half have a midfoot strike. They run the way it works for them. You do too.
Alexander Pope said, "Tis with our judgments as our watches; none go just alike, yet each believes his own." Ask a group of men what time it is and they will all say a different time, then argue that only their watch is correct. Religion is the same. No matter what you believe, there are people who are convinced that theirs is the one true faith and you don't know what's right.
Here's my advice. If you want to take up minimalist running, try it in very small doses over a very long period of time to allow your body to adapt, so that you won't join the crowds of people visiting their podiatrists after joining this cult. It may not be for you, no matter what Chris MacDougall says.
Posted by Unknown at 3:55 PM 2 comments: 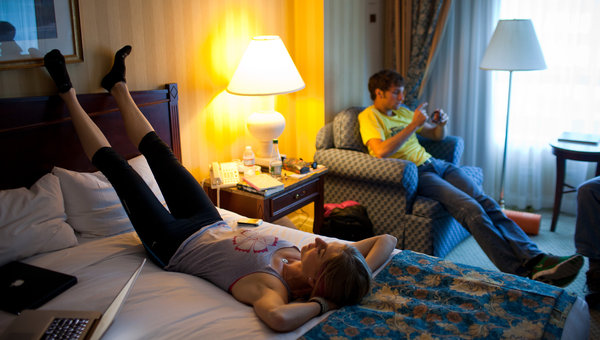 The Marathon in a Minute

A Lesson in Self 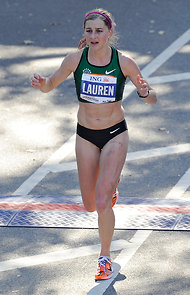 Readers shared their thoughts on this article.

Am I ready? Am I strong enough? Where are the portable toilets?
“I’m not afraid of hitting the wall,” Fleshman, 30, of Eugene, Ore., had said a few days earlier. “It would be an honor to hit the wall. I just don’t know what to do if I have to go to the bathroom.”
Unlike most first-timers, Fleshman is a professional, not an amateur. Sunday for her was a rare experiment. She is a track runner. In late summer, she finished seventh at 5,000 meters at the world championships. No American woman had ever finished higher in the event.But to have any chance for a medal at the 2012 London Olympics, Fleshman realized she needed more power and endurance to defeat the Kenyans and the Ethiopians. Perhaps marathon training would give her added strength on the track.
“Grete tried this, coming off a 3K,” said Paula Radcliffe of England, the marathon world-record holder, referring to the great New York City Marathon champion Grete Waitz. “I think she almost shot her husband: What did you make me do? Then she came back and won nine times.”
Fleshman did not have aspirations of winning. If things went well, she wanted to finish in 2 hours 30 minutes or 2:35. Mostly, she just wanted to finish.
“I want to join the club,” she said.
At breakfast, butterflies fluttered in Fleshman’s stomach as she tried to eat some oatmeal.
“I feel really full but panicked that I’m not eating enough,” she said, a pink streak in her blond hair. “How do you eat enough to run 26 miles?”
From the hotel bellman she borrowed a pair of scissors and cut the lining out of her running singlet so it would not restrict her rib cage. At 6:30 a.m., she gave her husband a hug and joined other elite runners on buses to the start on Staten Island.
“I feel like I’m off to do something huge,” Fleshman said.
This idea of running a marathon first came up in March.
“You’re going think I’m crazy, but hear me out,” Fleshman told her husband, Jesse Thomas, a professional triathlete. “I want to run the New York Marathon.”
The response was not encouraging. “Are you smoking crack?” Thomas said.
Mark Rowland, Fleshman’s coach and a bronze medalist for Britain in the steeplechase at the 1988 Seoul Olympics, was equally skeptical.
“No offense, but I think that’s the stupidest idea you’ve come up with,” Rowland said.
At the time, Fleshman was limited to running in a pool. Chronic foot problems had resurfaced. She had not run on pavement in 12 weeks.
But she felt the need for a radical shake-up. Twice she had won the national championship at 5,000 meters, or 3.1 miles, but her career was repeatedly interrupted by injury. Four times Fleshman had sustained stress fractures in her left foot. Her tendons and ligaments were so tight and bound up, the bones pushed against one another like boats in a hurricane-ravaged marina. Brick foot, her chiropractor called it.
Nothing seemed to be working. So Fleshman would try something drastically different, even if it seemed counterintuitive, training for a marathon on brittle feet. “I just had to get out of this cycle,” she said.
Learning From Africans
After finishing eighth in the 5,000 meters at the national championships in June, Fleshman improbably had a breakthrough in August, running 15:00:57 for the 5,000 at a meet in London. This was the fastest she had run in three years, only two seconds off her personal best, 14:58:48. Three weeks later, at the world championships in Daegu, South Korea, Fleshman finished seventh, the top non-African.
The race was encouraging and sobering. With 1,000 meters, or two and a half laps, remaining, Fleshman hung on the shoulders of the leaders. Then suddenly, she fell back into ninth place.  The rest is Here
Posted by Unknown at 8:27 AM No comments: