It wouldn't be so hard if it wasn't for the one hill!

That was this year's theme for the 60th running* of the Pike Peak Marathon "PPM" (*more like run/walking).

Note: this is the story of a recreational middle aged athlete.

My History with the PPM (tldr;?)

PPM Attempt 1: In 2013, after ~4 years of experience in my newfound hobby of running, I moved to Manitou Springs, CO and thought that and coming out of clicking off upper 6min - low 7min miles in east coast road marathons -- I should focus more on trail running.  More specifically Colorado trail running.  I would sign up for the 2013 pikes peak marathon and to place 'relatively' well (for a middle aged dude with only a few years of lifetime running under his hydration-flask-filled-running-belt.)

From my house, it was a 3mile run to the mouth of the Barr trail.  I would just keep ascending a little farther every week from March to August and show e'rybody this was my new backyard!  By August 2013, I'd ascended pikes peak 4 times and had bi-weekly runs up to Barr camp.  I was becoming an acclimated and a trail runner.  ;)

The 2013 PPM race went .....very poorly. I'm not sure why!  I pushed as hard as I could, but I heard a barrage of requests "excuse me, can I please get around you?"  At the end, I felt like I'd worked hard and really earned my medal.  It seemed harder than many 50milers I'd done to date!  Something so grueling about all that constant UP only to be rewarded with potential energy you can't cash in on during the never ending downhill!  2013 Finish Time: 6:48, Ascent split: 4:04

PPM Attempt 2:  Early 2014, I transferred to my old company and moved to Boulder, CO.  Glad to still be in Colorado!  But honestly, I feel more of a suburban-dweller than a mountaineer.  To get above 10,000' elevation requires a drive.  It's 3+ miles of flat city streets with crosswalks before I hit 'the trails' for a run. The quality breweries make up for any of these 'gripes' - just different for running options.

I tried to keep up my training when I could -  just trying to be a better trail runner.  I found routes that were hard and tried to improve my pace at fixed effort levels.  But in June while traveling for work I tripped HARD and broke my second toe.  It was comical how UNtechnical the trail was.  I was out of commission for at least 6weeks.  Sadly, I had to cancel races and put training on a big pause.  The toe was getting better fast and I was making short, LOW heart rate runs after a month**.  I wanted the new bone mass to know what it was in for, of course!  I upped my mileage to ~10-13miles and it was time to run the PPM again.

At the time, I was thinking of the ole saying 'better to enter a race 10% undertrained than 1% overtrained.  I was certainly under trained, but I had some gains from the months prior.  It went SO much better than the previous year.  I was in the right place from the get go.  With one mile to go on the ascent portion, I was giggling that I felt so well.  I could still bound up rocks, plenty of energy left.  I knew I was MUCH better placed in the race.

The downhill however, my toe was throbbing and that was affecting a twist and push off on the right side.  I kept rolling my ankle over and over***.  I was so mad, walking for extended periods while descending.  I finished kind of strong, but limped home.  Too soon after toe healing to race?  Good to have an extended taper before a race to let the rest of my body fully heal?  Not sure.

Ffwd - after the race I ran a recovery run (probably too hard) and felt a snap!  Some connective tissue to fibula was in pain.  I went through weeks of recovery from that.  Between that pain and the toe, I took >20% of my running year off!  I was a little crazy, like a caged animal.  There was a pleasant distraction of my son, Logan being born! 2014 Finish Time: 6:04, Ascent split: 3:41

PPM Attempt 3: 2015 had a nice start!  I participated in most of the Human Potential Running Series fat ass events.  It was a great way to get out when the weather wasn't so good and go long distances.  I used time between these events to focus on other trail skills and cycle through several traction aid devices for snow/ice running.  As the spring/summer was getting closer, I'd decided on only three races to run: BigHorn 50miler, Sheep Mountain 50miler, and PPM (again!).

I was having a hard time focusing training in spring.  I like to hit at least 10hours / week, but I seemed to be stuck at 6-8hours for a few weeks in a row.  I decided to recruit the coaching assistance of Team Colorado's Peter Maksimow.  I watched Peter win the Greenland 50km and wondered how to run as evenly and smoothly as he!  But poor guy, I contact him saying 'help i have a few 50s coming up and want to do better at PPM!  He crafted a training plan on the fly constantly checking on how I was responding to the increase in volume.  Peter was also very helpful in telling me how to handle the days after a long slow, grueling race like the BigHorn and Sheep Mtn races.  Another difference for me was seeking time to complete more than one long run per week.  As a result, there were a few 13-15hour weeks - running many of those extended miles at night after kids were asleep. (please remind me to make up those lost hours of sleep!)

My body responded well to the slight over-reach and I was getting segment PRs on my old paths.  The day after a long run I'd feel great, then sore, then great - a real roller coaster.  My wife looks down at dinner one night and says "I think your calves are now bigger than your thighs" (haha!). 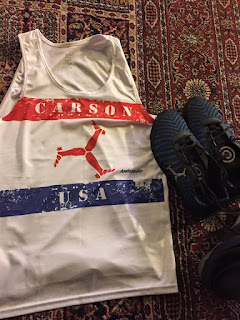 Around this time, I apply to become a Carson Footwear Ambassador after having ran in their Iguana Racer for so many of these extended training runs.  I believe in the brand and think they're on to something!  I order their blue tigers (insert "we're tiger and bunny and we like the boom" audio clip) and receive a bonus race singlet for my troubles!  (Thanks Mr. Carson).  I knew the tigers would be just what I needed.  I didn't bother wearing them except for the race, that worked VERY well.

Just before this year's PPM, I find out I need to travel to east coast (sea level) for the better part of the week.  Two possibilities: I lose red blood cell count that comes with altitude acclimation, or I recover well for a taper in this 'hyperoxic' place.  It could go either way, eh?

The race: gun goes off and I....wait two minutes because I'm in wave two!  Start time for people like me is 7:02am.  My previous finish time put me at an approximate finish place of #265.  The first 100 athletes start in wave one, those talented bishes!  When I finally do start, I insert myself about where I think I belong for my coral.  I can see the first runners, and I'm a cluster behind them.  On the way UP I spent much more time saying 'excuse me can I pass you' than receiving it.  Some very well disciplined people passed me with much energy near the top!  But I feel I took many more places than I gave up. I was tired, but I knew I was doing well.  I never looked at watch, did NOT monitor heart rate.  Exclusively went by breathing.  Near the top it was one breath per step and I was walking.  I felt very tired, but muscles felt good!

I began my descent and after a few miles felt the onset of a few cramps.  I used Noakes's theory of the central governor and convinced my body that muscle group did NOT intact need to shut down and the cramping feeling went away.  Some downhill miles were 10mins, then I counted a 9, then an 8, the final stretch were a couple miles in the 7min pace.  I needed only a few walking steps on the way down where it was most technical.  I was passed by some VERY talented downhill runners, they'd been waiting for these stretches to turn it up and zoom by the likes of me!  I was happy to be in their company even if they finished just ahead of me.

During the race I had a medium sized bottle to carry with 1.5 scoops of Ucan Superstarch.  I had 2 refills of pure water in my bottle, in total.  I dropped the bottle with 2.5miles to go to the summit, picking it back up on the way back down!  People noticed it was left there and a couple other bottles were dropped at the same place - trend setter, no big deal.  In my pockets were 3 packets of Stinger Honey (just honey, none of their other options).  Along the way, I drank two cups of the aid-station-provided Gatorade and took a total of 12 red grapes.  I consumed approx 400 calories during the race, while bring 4,800.  This is more sugar than I would consume in an ultra that could last double the time.  PPM is a more intense bout!


The advantage of being a fat adapted athlete (one who burns the fat he's carrying IF the intensity level is low enough) is that I can fuel myself off my own fat and/or exogenous simple carbs.

Summary (in nonsensical list format)
1. If you can afford it, get a damn coach.  You're accountable to somebody, you have someone to talk to about a very common interest - your performance.  They can evaluate where your shortcomings are dispassionately, etc...

2. If you like to race, get gear that can you can rely on. (lol,... you-can, Ucan).  For example, those shoes.  Like me, you can train in the most minimal of shoes.  But if you plan to run at night, technical trails, at speeds that may exceed considerate foot placement - get a shoe that offers some appropriate protection.  A shoe that doesn't add more mass than what your'e used to, either with rock plates or a more dense rubber bottom.  During this year's PPM, I KICKED a few rocks that would've been a broken bone in less of a shoe.  It's hard to find a shoe's sole that offers proprioception, but protection from sharp rocks - and is light weight.  That's what I found in Carson's shizz.

3. When I was a gym-rat that only cared about muscle size, I noticed to see 'real' gains I had to workout a body part more than once a week.  I harkened back to that reasoning this season - in adding multiple long runs in a week, I immediately saw them getting easier.  Showing your body this is the new normal is the key, she'll adapt!


**This is KEY to a good recovery after an acute injury.  When you get movement back, set a heart rate monitor to a low value and NEVER exceed it.

***Many people don't know that at a certain point, a trail runner has ankles of steel - what sprains some people's ankle barely affects two steps of a seasoned trail runner