100: Head/Heart/Feet opens is an amazing look into the Vermont 100 (VT100).  At this point it's the most decorated ultrarunning film, appearing at 12 film festivals, receiving  director's award.  We follow Zak Wieluns in his third attempt at completing the VT100.  As the story unfolds of race, we flash back to his training and previous attempts.  This story is complemented with stories of other endurance athletes and germane interviews from professionals.  Anyone in the sport has failed an attempt at an event, or knows someone who has.  (Know thyself in my case!) 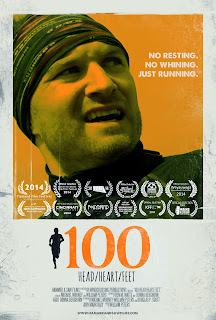 I am a sucker for these films since it is my sport.  I was stoked to be offered a chance to view a Kickstarter Screener.  I guess my wood working background appealed to 'Hammer and Saw films' (hehe).

100: Head/Heart/Feet opens at an aid station 'somewhere in Vermont' at 10:30pm we see a race that has been going on ALL day.  Weigh-ins for the runners, medical attention, head lamps, cramps, scrapes and (notably) dozens and dozens of volunteers, crew'ers.  So much support.  As a runner, I seldom get to see the behind-the-scenes work, concerns, logistics and support that goes in to races like this.  Movie summary from the creator's the site:


“100: Head/Heart/Feet” will follow the day-to-day life of ultra-runner Zak Wieluns as he trains for and finally runs a 100 mile race. The actual event is called the Vermont 100 Endurance Race, one of the original 100 mile runs in the USA. This year the Vermont 100, which raises funds to benefit the Vermont Adaptive Ski and Sports Association, celebrates its 25th anniversary, promising an even more competitive challenge for the 300 dedicated runners who attempt to complete this grueling competition over Vermont’s paved streets, gravel back roads and wooded trails…in daylight and darkness…all within 30 hours. A well-trained few will complete the race; many will never cross the finish line.

Being a 'recreational' runner, like Zak, one finds a struggle for not just the runner but also for those close to the runner.  Many of us are: parents, husbands, cubicle-slaves, and.... also wanting to run 10-20 hours per week??  John Lacroix is interviewed in the movie and makes the most salient points about how the hobby of unltrarunning is <paraphrased> what we need to be happy.  It is important our loved ones understand that.  With equal fervor, we must encourage our loved ones' pursuits for equivocal levels of happiness! (just my opinion.)

This movie is the story of a journey, finishing something you've started.  Lean on people you care about to help you through your journey.  Never be afraid to ask for help.  I cried three times during this well put together documentary*.  The filming shifts to focus in on small details of what a runner might notice.  Explains the physical and emotional pains of reaching far to achieve something great.  This movie is for everybody, whether or not you plan to run 100 miles.

My favorite scene: The recurring interjections of a sports psychologist explaining the underlying rationale an endurance athlete is making the decisions and reasoning they exhibit.  Tied with the interviews of ultra-athletes that give their own applicable experiences.

What bothered me about the movie: The concept of weigh-ins for endurance athletes.  It's ok to see if someone is gaining too much weight (overdrinking!)  But losing weight in an endurance event will never lead to dehydration as is suggested.  It's not the movie-makers' fault for this potentially misleading information.  The concepts of calories in = calories out and drink to lower body temperature or avoid dehydration are antiquated and need to stop.  Hundreds of endurance athletes have overhydrated and died through exercise associated hyponatremic encephalopathy (EAHE).  Many times by EMTs not knowing what the athlete is suffering from and adding more hydration intravenously.  It's a pet-peeve of mine that this dogma continues.

Support the sport, see the movie.  Then train for something hard!


*As a teenager I swam for the state.  I was tested for VO2max, step-tests, etc.  At the time, I was under the impression I would be some notable athlete.  Mostly it was natural ability, decent genes.  After a misspent youth and young adulthood, I didn't do another competitive event until I was 39 years old.  Watching Zak go through some of the athletic testing resurfaced some of those emotions.  So well filmed, it hit me hard.

"So if you'll excuse me, there's someone I need to get in touch with and forgive.... myself"
-Fat Bastard